CLDDS remains OPEN and dedicated to current clients and accepting new clients. Please contact us at 732.797.1600 to speak to a live person and schedule a virtual conference or new client consultation TODAY. 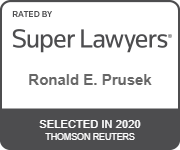 Ron has worked as a criminal prosecutor, a house counsel for a major insurance company, a private practitioner, and was a Partner of a law firm. Ron has served as a Deputy Attorney General for the Division of Criminal Justice as a trial attorney handling multi- defendant, State Grand Jury cases and then became a staff attorney with the house counsel arm of Continental Insurance Company, served as a member of the Monmouth County Tourism Advisory Council and became its chairman in 1981. Ron also served as a member of the Executive Committee of the New Jersey Civil Trial Bar, a member of the Ocean County District IIIA Ethics Committee and was President of the Ocean County Bar Association.

Ron retired from full time practice with the Firm in 2019. However, he is a R. 1:40 Qualified Mediator and Arbitrator in New Jersey and has been certified by the Florida Supreme Court as both a County and Circuit Court Mediator. Ron has earned the highest possible peer review rating given to attorneys for legal ability and ethical standards by Martindale Hubbell and has been honored as a Super Lawyer in New Jersey.

I wanted to thank [Ron] for the wonderful job that he did on my behalf. It was a difficult time for me and he and Tracy made it easy to deal with. Their professionalism and caring was just wonderful. I wish them both the best in the future and once again send my thanks for all you have done.